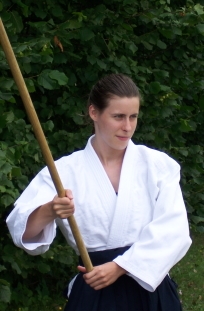 May 2009
establishing the Aikido group
KIN NO NUMA in Dresden

How I came to Aikido and developed me …


As I at the age of 14 years read an article about sword training (part of Aikido), I thought, something like this I would like to train. Unfortunately, my social environment did not care for my interests and it took 5 years, until I as adult, at the age of 19, started with aikido training.

Approximately 7 ½ years I trained in an Aikidoschool until because of differences with the headmaster our ways got seperated.

Afterwards I looked at other Aikido groups and Aikido schools, but I didn’t found something, what corresponded with my expectation from Aikido/ Budo . Many Aikido teacher imparted in fact techniques but the "Ai" in the meaning of harmony and friendship was missing. Aikido is far more than just a pure sport or an accumulation of self-defense techniques, it is a holistic movement system with its techniques you be abled to defend yourself. Out of necessity, I had the idea to offer free-costs children training directly in social institutions and thus a so-called to create "win-win" situation for all sides (see Projects). We are independent of an association. That means everyone can decide for themselves whether to join an association or whether he does not require this.

The personal and individual development in Aikido is as important as the joy on training. At various courses from different Aikido teachers I participate regulary and educate myself so on.